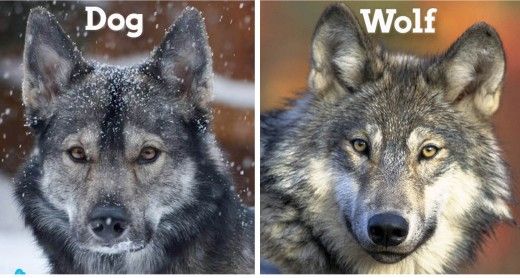 Despite their close genetic relationship and interbreedability, there are several diagnostic features to distinguish the gray wolves from domestic dogs. Domesticated dogs are distinguishable from wolves by starch gel electrophoresis of red blood cell acid phosphatase.The tympanic bullae are large, convex, and almost spherical in gray wolves, while the bullae of dogs are smaller, compressed, and slightly crumpled. Compared with equally sized wolves, dogs tend to have 20% smaller skulls and 30% smaller brains. The teeth of gray wolves are also proportionately larger than those of dogs. Dogs have a more domed forehead and a distinctive “stop” between the forehead and nose. The temporalis muscle that closes the jaws is more robust in wolves. Wolves do not have dewclaws on their back legs unless there has been admixture with dogs that had them. Most dogs lack a functioning pre-caudal gland and enter estrus twice yearly, unlike gray wolves, which only do so once a year. So-called primitive dogs such as dingoes and Basenjis retain the yearly estrus cycle.

Dogs generally have brown eyes, and wolves almost always have amber or light-colored eyes.Domestic dogs’ skin tends to be thicker than that of wolves, with some Inuit tribes favoring the former for use as clothing due to its greater resistance to wear and tear in harsh weather.The paws of a dog are half the size of a wolf, and their tails tend to curl upwards, another trait not found in wolves.The dog has developed into hundreds of varied breeds and shows more behavioral and morphological variation than any other land mammal.